12 Things That Every Goldsmiths Student Should Know

Writers_[smiths] team We’re getting on the BuzzFeed hype, and bringing the tone down a little. 1. RHB (Richard Hoggart Building) is a bitch. Whether you’re a first year or a third year, Room 352 is always going to prove hard to find.   2. It’s an obvious one, but Club Sandwich is generally only properly…

Whether you’re a first year or a third year, Room 352 is always going to prove hard to find.

2. It’s an obvious one, but Club Sandwich is generally only properly busy at Freshers.

And they appear to use the same playlist each week

3. We’re not all pretentious ‘hipsters’.

And if we are, good luck finding someone who would admit it.

4. Exam time brings out the worst in our student population.

A genuine artefact circa exams 2013

5. There is a certain shop, on a certain well-known high street, where you can buy certain substances. And no, it’s not just the launderette.

No need to go into details…

6. Legend has it that there was a guy who set fire to the roof of Batavia Mews. 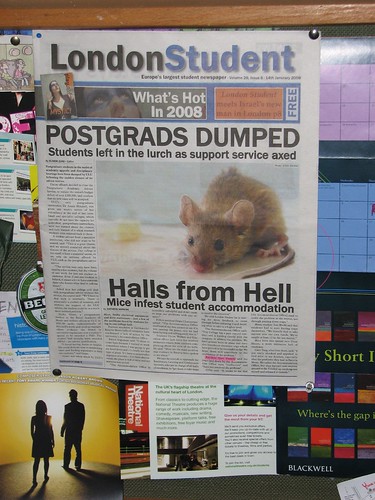 He was also rumoured to be on LSD at the time.

7. The SU offices are not as elusive as they seem

They’re behind the doors at back of the dance floor.

Think Blake, Blur and Katy B.

9. There is a member of staff that drinks absinthe in lectures. 10. A former Goldsmiths Fine Art student’s artwork mainly consisted of her own excrement.

11. Swiping your library card in (or out) will never get easier.

12. But we’d advise you to embrace the apathy towards ‘unilad culture’, and enjoy the fact that we get to live in one of the most buzzing cities in the world.

We may be getting a slightly ‘alternative’ education, but it definitely has its bonuses.

Down a Kinky and Debauched Rabbit Hole
Could You Make it in Fashion?